The occult novels of Gustav Meyrink 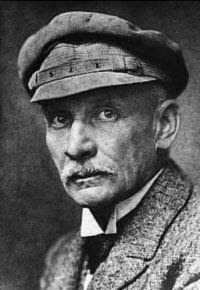 Gustav Meyrink was born in Vienna on January 19th, 1868, sixty years to the day after Edgar Allen Poe was born (January 19th, 1808). He was the illegitimate child of an aristocrat named Karl Gottlob Freiherr von Varnbüler and an actress with whom he had an affair. His mother raised him in Munich and later he went to Hamburg to study. His father paid for his education, but never acknowledged him. In 1883 he moved to Prague to become a banker and lived there for twenty years.

In 1892, at the age of twenty four, he contemplated suicide. Just as he held the gun to his head someone slipped a spiritualist pamphlet entitled Afterlife under his door. He was so stunned by the coincidence he began to study the occult. Meyrink later became involved with the Hermetic Order of the Golden Dawn. He had a brief career in banking which ended in a scandal in which he was actually charged with using the occult to commit fraud.

Meyrink worked as a translator after the scandal and then began writing short stories, first in a magazine called Simplicissimus and eventually publishing three compilations of his stories. In 1915 his first novel, The Golem, was a huge success, selling 100,000 copies.

In The Golem, an artist who has lost all memory of his past is visited by a mysterious being who entrusts a magical book to him to be restored. We follow him on a quest for his lost past as he experiences a series of supernatural encounters and mystical revelations in a wonderfully described turn of the century Jewish ghetto of Prague, filled with fantastic characters and even more fantastic legends.

I love Meyrinks descriptions as well as his characters and the way he weaves mystical lessons into the plot. Meyrink uses the novel to help us learn "things that cannot be taught".

Walpurgisnacht is a novella also set in Prague. In it evil forces possess the populace, inspiring a revolt that floods the streets of Prague with blood to the beat of a drum made from human skin. 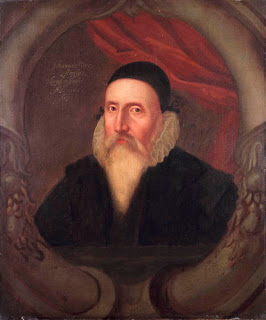 In The Angel of the West Window a descendant of Sir John Dee inherits his papers and as he begins to go through them he becomes possessed by the spirit of Dee. A large amount of John Dee's actual papers are included in the story in this way. Characters from Dee's life keep showing up reincarnated in between hallucinagenic flashbacks to John Dee's time. The story progresses from Dee's castle in england, around europe to a medieval Prague of hissing alchemist Emperor Rudolf and mysterious kaballistic rabbis as Dee is exploited by the charlatan Edmund Kelly. A sort of biography in the form of an occult novel, the story is a fitting tribute to the man who inspired Shakespeares Prospero.

The White Dominican was Meyrinks final novel. In it he gives us the essence of his unique blend of taoism, buddism, gnosticism, and kabballah. Here's a sample:

Just as we cannot comprehend the meaning of a book if we just hold it in our hand and turn the pages without reading, so we will not profit from the course of our destiny if we do not grasp its meaning. Events follow each other like the pages of a book that are turned by Death; all we know is that they appear and disappear, and that with the last one the book ends. We do not even know that it keeps being opened, again and again, until we finally learn to read. And as long as we cannot read, life is for us a worthless game in which joy and sorrow mingle. When however, we finallly begin to understand it's living language, then our spirit will open it's eyes, and will start to read, and will breathe with us.

The novels of Gustav Meyrink have recently been wonderfully translated into english by Mike Mitchell and published by Dedalus Press.