Whether the dead be enclosed in sculptured stone sarcophagi, or sealed in the hollow of metal or clay urns, or encased upright, gilded and decorated in blue, with brain and viscera removed, swathed in linen bands, yet will I conduct them in a company and guide them on their way with my controlling wand.

We advance down a swift path that eye of man hath not seen. Harlots press close against virgins, murderers against philosophers, mothers against those that refused to bear children, and priests against perjurers. For they repent them of their sins, were they those of the imagination or of the deed. And having never been free upon earth, since they were there trammelled by customs and laws, or their own beliefs, they fear isolation and cling to each other for help. She that slept naked in the tiled chambers among the men is consoling a young girl who died before her nuptial eve, — yet dreaming imperiously of her love. One that was wont to murder on the highways, his face grimed with ashes and soot, places his hand on the brow of a thinker who wished to regenerate the world and preached death. The woman who loved her children and suffered through them buries her face in the bosom of an hetaira who, by intent, was without issue. The long-robed man that was persuaded he believed in his God and constrained himself to kneel often, now weeps on the shoulder of a cynic who broke every law of the flesh and spirit before the eyes of the world. So sustains the one the other along the route, journeying under the yoke of memory.

Then they come to the bank of Lethe where I range them along the shore of the silent-flowing water. Some plunge therein their heads containing evil thoughts, others the hands that wrought evil. Rising therefrom, the water of Lethe has effaced all remembrance.

Therewith they stand aloof from one another, and each smiles believing he is free.

Our Lady of Sighs 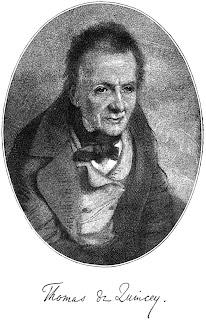 The second sister is called Mater Suspiriorum — Our Lady
of Sighs. She never scales the clouds, nor walks abroad
upon the winds. She wears no diadem. And her eyes, if
they were ever seen, would be neither sweet nor subtle; no
man could read their story; they would be found filled with
perishing dreams, and with wrecks of forgotten delirium.
But she raises not her eyes; her head, on which sits a
dilapidated turban, droops for ever, for ever fastens on the
dust. She weeps not. She groans not. But she sighs
inaudibly at intervals. Her sister. Madonna, is oftentimes
stormy and frantic, raging in the highest against heaven,
and demanding back her darlings. But Our Lady of Sighs
never clamours, never defies, dreams not of rebellious
aspirations. She is humble to abjectness. Hers is the
meekness that belongs to the hopeless. Murmur she may,
but it is in her sleep. Whisper she may, but it is to herself
in the twilight. Mutter she does at times, but it is in
solitary places that are desolate as she is desolate, in ruined
cities, and when the sun has gone down to his rest.