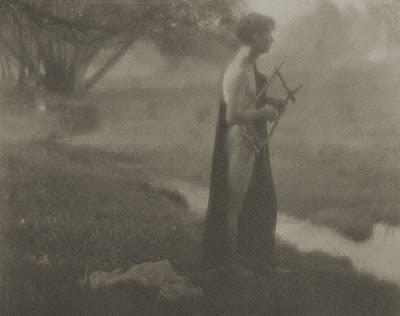 
One evening, I sat to down to try write something. I wanted to write something beautiful and inspired and filled with passion. After several abortive attempts, I found myself lacking in inspiration and confidence. Feeling inadequate and unworthy of the task before me and lamenting my failure, I sought solace in a book and found it in a poem, a poem written about 180 years ago by a favorite author and poet, much beloved since my childhood, Edgar Allan Poe.

The poem was one called Israfel. It is unique among Poe's poems which are often melancholy expressions of the grief of love lost, an emotion Poe knew only too well having lost his mother and stepmother in childhood, followed by the tragic loss of his wife as an adult. The poem Israfel expresses a different kind of emotion, a different kind of grief, the grief of the frustrated artist, unable to fulfill his desire, to achieve his dream, to create something worthy of his own ideal.

In Heaven a spirit doth dwell
"Whose heart-strings are a lute";*
None sing so wildly well
As the angel Israfel,
And the giddy stars (so legends tell),
Ceasing their hymns, attend the spell
Of his voice, all mute.

Tottering above
In her highest noon,
The enamored moon
Blushes with love,
While, to listen, the red levin
(With the rapid Pleiads, even,
Which were seven,)
Pauses in Heaven.

And they say(the starry choir
And the other listening things)
That Israfeli's fire
Is owing to that lyre
By which he sits and sings-
The trembling living wire
Of those unusual strings.

But the skies that angel trod,
Where deep thoughts are a duty-
Where Love's a grown-up God-
Where the Houri glances are
Imbued with all the beauty
Which we worship in a star.

Therefore thou art not wrong,
Israfeli, who despisest
An unimpassioned song;
To thee the laurels belong,
Best bard, because the wisest!
Merrily live, and long!

The ecstasies above
With thy burning measures suit-
Thy grief, thy joy, thy hate, thy love,
With the fervor of thy lute-
Well may the stars be mute!

Yes, Heaven is thine; but this
Is a world of sweets and sours;
Our flowers are merely–flowers,
And the shadow of thy perfect bliss
Is the sunshine of ours.

If I could dwell
Where Israfel
Hath dwelt, and he where I,
He might not sing so wildly well
A mortal melody,
While a bolder
note than this might swell
From my lyre within the sky.

*And the angel Israfel, whose heart strings are a lute, and who has the sweetest voice of all God's creatures. - Koran


The footnote is Edgar Allan Poe's. However, Israfel is never mentioned in the Koran by name, but is referred to several times as the archangel who blows his trumpet at the day of last judgement.


In Islamic tradition Israfel(The Burning One) is one of the four archangels. After creating the world, God commanded the archangels to gather dust from the four corners of the earth. Only Israfel succeeded in his mission. The dust he collected was used by God to create Adam.


Israfel stands closest to God with his eyes averted in fear of God and holds his trumpet to his lips throughout the centuries awaiting the order to blow it announcing the day of last judgement. The first time he blows his horn every creature in heaven and earth will instantly fall to the ground unconscious. The second time he blows his horn all creation will stand at attention to await the judgement of god.


In Sufism the greatest saints are said to be those who have heart resembling the heart of Israfel.