The Veiled Image at Sais 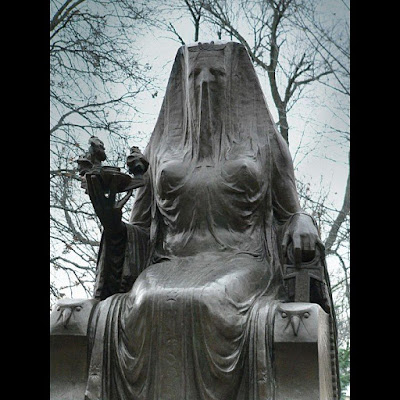 A youth, impelled by a burning thirst for knowledge
To roam to Sais, in fair Egypt's land,
The priesthood's secret learning to explore,
Had passed through many a grade with eager haste,
And still was hurrying on with fond impatience.
Scarce could the Hierophant impose a rein
Upon his headlong efforts. "What avails
A part without the whole?" the youth exclaimed;
"Can there be here a lesser or a greater?
The truth thou speak'st of, like mere earthly dross,
Is't but a sum that can be held by man
In larger or in smaller quantity?
Surely 'tis changeless, indivisible;
Deprive a harmony of but one note,
Deprive the rainbow of one single color,
And all that will remain is naught, so long
As that one color, that one note, is wanting."

While thus they converse held, they chanced to stand
Within the precincts of a lonely temple,
Where a veiled statue of gigantic size
The youth's attention caught. In wonderment
He turned him toward his guide, and asked him, saying,
"What form is that concealed beneath yon veil?"
"Truth!" was the answer. "What!" the young man cried,
"When I am striving after truth alone,
Seekest thou to hide that very truth from me?"

"The Godhead's self alone can answer thee,"
Replied the Hierophant. "'Let no rash mortal
Disturb this veil,' said he, 'till raised by me;
For he who dares with sacrilegious hand
To move the sacred mystic covering,
He'--said the Godhead--" "Well?"--"'will see the truth.'"
"Strangely oracular, indeed! And thou
Hast never ventured, then, to raise the veil?"
"I? Truly not! I never even felt
The least desire."--"Is't possible? If I
Were severed from the truth by nothing else
Than this thin gauze--" "And a divine decree,"
His guide broke in. "Far heavier than thou thinkest
Is this thin gauze, my son. Light to thy hand
It may be--but most weighty to thy conscience."

The youth now sought his home, absorbed in thought;
His burning wish to solve the mystery
Banished all sleep; upon his couch he lay,
Tossing his feverish limbs. When midnight came,
He rose, and toward the temple timidly,
Led by a mighty impulse, bent his way.
The walls he scaled, and soon one active spring
Landed the daring boy beneath the dome.

Behold him now, in utter solitude,
Welcomed by naught save fearful, deathlike silence,--
A silence which the echo of his steps
Alone disturbs, as through the vaults he paces.
Piercing an opening in the cupola,
The moon cast down her pale and silvery beams,
And, awful as a present deity,
Glittering amid the darkness of the pile,
In its long veil concealed, the statue stands.

With hesitating step, he now draws near--
His impious hand would fain remove the veil--
Sudden a burning chill assails his bones
And then an unseen arm repulses him.
"Unhappy one, what wouldst thou do?" Thus cries
A faithful voice within his trembling breast.
"Wouldst thou profanely violate the All-Holy?"
"'Tis true the oracle declared, 'Let none
Venture to raise the veil till raised by me.'
But did the oracle itself not add,
That he who did so would behold the truth?
Whate'er is hid behind, I'll raise the veil."
And then he shouted: "Yes! I will behold it!"
"Behold it!"
Repeats in mocking tone the distant echo.

He speaks, and, with the word, lifts up the veil.
Would you inquire what form there met his eye?
I know not,--but, when day appeared, the priests
Found him extended senseless, pale as death,
Before the pedestal of Isis' statue.
What had been seen and heard by him when there
He never would disclose, but from that hour
His happiness in life had fled forever,
And his deep sorrow soon conducted him
To an untimely grave. "Woe to that man,"
He warning said to every questioner,
"Woe to that man who wins the truth by guilt,
For truth so gained will ne'er reward its owner."

A Translation of "Die Lehrlinge zu Sais" by Novalis
Posted by David X at 12:00 PM No comments: