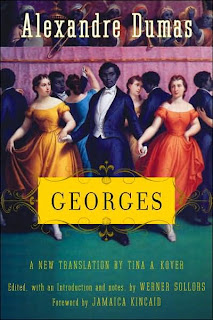 I am very happy to report the publication of a great new novel... by Alexandre Dumas! How can there be a new novel by Dumas you ask? This novel has been lost and forgotten to us for more than a century. A wonderful new translation by Tina Kover has recently been printed in a beautiful hardcover edition by The Modern Library (Random House). Jamaica Kincaid has written a forward which is a masterpiece in itself.

Georges is the story of a boy from Isle de France, the son of a wealthy mulatto planter. Georges and his brother are sent to France by their father, to protect them from the wrath of the bigoted white planters on the island.

Through incredible self discipline and will power, Georges distinguishes himself intellectually and transforms himself through grueling training from a skinny ascetic to a strong and robust man, as well as a master swordsman and marksman. Georges becomes the toast of high society in Paris and London. He goes into military service and distinguishes himself courageously, being decorated with the legion of honor by the king of France.

Georges then returns to Isle de France to avenge the treatment of his noble father by the racist planters on Isle de France, intent to destroy the bigotry on the island or die in the attempt.

Not everyone is aware that Alexandre Dumas was mulatto himself, the grandson of a French nobleman and an Afro-Caribbean woman, Marie-Cessette Dumas, who had been a slave. This is the only work in his more than 300 volumes of novels, plays, and prose which deals with the subject.

In this novel Dumas explores complex issues of race in great detail. Written and set in a period when slavery had been abolished in Europe in the wake of Napoleon, but not in many other places around the world, such as the United States. It was still legal to own slaves in French and English colonies. Although slave trading had become illegal in this period, it was still being carried on by privateers.

Georges and his father owned many slaves themselves. Issues of race between the wealthy mulatto planters and the black slaves are explored extensively in addition to those between whites and people of color.

The taboo of interracial love is beautifully explored in a romance between Georges and the fiancé of his Nemesis, the despicable racist son of a white planter.

This novel deals very effectively with issues of race that are as relevant today as they were over a century ago. It also speaks volumes about a period little known to most people. The first successful slave rebellion in Haiti had just occurred inspiring victims of slavery around the world to heroically and courageously fight for their own freedom.

Even without all the socially redeeming value, Georges is one of greatest novels of the greatest storyteller of all time. This is a marvelous romantic adventure with a noble and virtuous hero avenging social injustice similar to The Count of Monte Cristo. It is, put quite plainly, a joy to read.

I will end with the irresistible beginning of Georges:

"Have you ever, on a long, cold, melancholy winter night - alone with your thoughts and the wind whistling through the hallways, the rain pounding against the windows - have you ever leaned your forehead against the mantel, absently watching sparks dance on the hearth, and longed to flee our wet and muddy Paris for some enchanted oasis? Somewhere fresh and carpeted in green, where you could lie in the shade of a riverside palm tree and doze off without a care in the world?

Well the paradise of your dreams exists! Eden awaits you; the water flows clear and bright there, falling and surging up in bright dust; the palm fronds wave gently in the soft sea breeze like feathers in a genies cap. The jambosa trees, laden with iridescent fruit, stand ready to offer you their sweetly scented shade. Come, follow me now."