Doris Lessing was recently awarded the Nobel Prize for literature. She was unimpressed. She mentioned that in the 1960's a representative had been sent from the Nobel committee just to tell her that they didn't like her and that she would never win. Apparently they have changed their minds.

Doris Lessing was born on October 22, 1919 in Persia. Her father was a soldier in WW1. He had lost a leg in the war and met her mother, who was a nurse, in the hospital when he was recovering . The couple moved to Persia where her father worked as a bank clerk. Doris was born there.

In 1925, when Doris was 6, the family relocated to colonial Southern Rhodesia to make their fortune farming. Unfortunately farming turned out not to be as lucrative as they had hoped. They were not wealthy.

Doris was sent to a convent school and later to an all girls boarding school. She dropped out of school at the age of 13 or 14. Doris worked as a nanny and later as a stenographer. One of her employers loaned her books and she began a course of self education that eventually resulted in her preeminence as a leading intellectual and free thinker.

In 1950 her first novel The Grass is Singing explored the failing marriage of a colonial south african white couple and the affair of the wife with her black servant.

In her 1962 novel The Golden Notebook, a successful female author named Anna tries to live her life with the freedom of a man. Anna records her thoughts and experiences both personal and intellectual in four notebooks.

As she attempts to tie together the four notebooks in one golden notebook, Anna examines contemporary issues in the context of her own life and applies her powerful intellect to draw some very relevant conclusions. Relevant enough to make Doris Lessing famous and make The Golden Notebook required reading today. 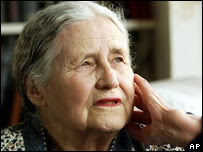 Over the years many groups have wanted to claim Doris as one of their own. Feminists, communists, Sci fi fans, and adepts of Sufism, among others, have enthusiastically attempted to name her as their guru for decades. Doris herself has always reveled in the impossibility of catagorizing herself or her work with any kind of label.

Indeed the theme of much of her work is the individual repressed by social roles and conventions struggling to emancipate their self.

She has written powerfully about women struggling to escape sexist gender roles and social mores.

She has written extensively on racism and colonial oppression in South Africa where she grew up.

Her work examines social, sexual,and racial roles as they effect the individual and society on a level seldom explored even today.

So, Doris deserves every award they have to throw at her. However, although these days honors are being liberally lavished upon the venerable Ms. Lessing. Few have mentioned what I and many others including Ms. Lessing herself consider her best work. Shikasta!

The books full title is Re: Recolonized Planet 5, Shikasta, Canopus in Argos: Archives, and it is quite a mindblowing book to read.

After the books release in 1979, a cult following grew which resembled some kind of new religion. She later stated that if she "had invented a new cosmology, it was for literary purposes alone."

The fantastic premise of the book is based in part on principles from the teachings of sufism in the works of the mystic Idries Shah.

The book is written in the form of a report from an alien, Johor, sent from the planet Canopus on a mission to the planet Argos (earth). Shikasta, sanskrit for something that has been broken, is the name of the dimension we humans exist in on Argos.

Johor's report spans millions of years of evolution and thousands of years of human development from prehistory to the future. It is the history of earth from the point of view of an alien who has been sent to aid in the evolution of species on this planet, and to help humans to achieve their evolutionary potential to be compassionate and enlightened beings. To boost this process the Canopeans are beaming positive energy called SOWF, Substance Of We Feeling, to Shikasta.

Many aliens are sent to earth to help. Aliens incarnate on earth to accomplish their missions, being born as a human. Many of us are aliens sent here on a mission and don't know it. Desires and sorrows distract us from accomplishing our missions in life. If we do not accomplish our mission, we have to keep incarnating here over and over again until we do. If we are successful in accomplishing our mission we can hope to be sent on a mission to someplace nicer next time, as Shikasta is a particularly tough assignment, a very painful world to visit.

The report continues into some near future where superpowers collapse and global war, economic devastation, environmental disaster and chaos ensue, a little too prophetic for comfort.

After the collapse of the superpowers, the Chinese are the the only power left standing. The white race is put on trial by an international tribunal. Our friend Johar has incarnated here as George Sherban to plead a case for the defense and stop the war and bloodshed before humans wipe themselves out completely.

I wont give away the ending. I'll just say everyone really should read this book. It will alter your world view and inspire you as Doris Lessing has inspired a generation of free thinking human beings to accomplish their mission to help make the world a better place to live, to alleviate human suffering, and stop war, and that's why she deserves all our admiration and respect.

Having said that. I need some SOWF. I am really getting low lately.

I agree with you. Shikasta is Doris Lessing's masterpiece. I love the entire Canopus in Argos series, actually. Best to read them all together, don't you agree?

By the way, I've also written about Shikasta and SWOF. I'd love to hear your comments:
http://joansdottir.blogspot.com/2008/05/love-and-debt.html

I am re-reading Shikasta (second time, previous was sometime in the last decade but not recently.)

I have the same reaction now that I did then.

There is some serious insight in this book, most notably the statement and perspective that perceiving oneself as an individual is central to the Degenerative Disease.

At the same time, the part about "The Trial" reads like the working out of a white person's terror of what people of color are going to do to Europeans/whites as backlash for the terrible actions by whites/Europeans to those whose cultural systems more closely resemble the approach Lessing is trying to advocate.

There is even a little piece where she has Canopus concerned with saving white people from genetic annihilation.

I think that part of the book reveals that for all her activism, there is a part of Lessing's consciousness that has absorbed the white nationalist rhetoric and perspective. That section reads to me like her using the book as a framework to both encourage and soothe herself and other white people holding fears about backlash based on the actions of whites/Europeans.

Both times I read this book, I was disgusted while reading that part of the book, then interested again afterward.

I am sorry that she so deeply marred what could have been a masterpiece with such a twisted/covert white nationalist fear-based section. It makes me wonder what else of this novel is coming from that place in ways that are too subtle for my conscious mind to perceive.

re Michelle's comments,
I have just read Shikasta for the second time also. (And I too found this blog using google.) My take on the Trial section is somewhat different. I would argue that post-colonial backlash against 'whites' is a real phenomenon, and not just some terror emanating from a white nationalist's guilty imagination. You see this especially in countries which, in the 20th century, gained independence from European domination. There is something dreadfully inevitable about it which I think is Lessing's real intent to portray. Victims of colonial oppression tend to have a heightened racial consciousness - for understandable reasons - which can often give way to hatred or desire for revenge. And this is unhelpful to the world. And sad. But not surprising, and no, not 'unfair' either.

Humans rarely learn from their own mistakes - and much less from the mistakes of others inflicted against them.