The painting above was found in Raphael's studio at the time of his death. The painting is known as La fornarina(the bakeress) and the woman in the painting is thought to be Raphael's roman mistress, Margherita Luti, the daughter of a baker from Seina.
﻿ 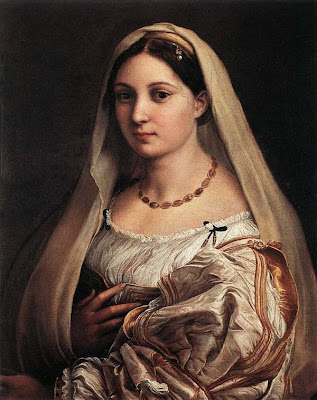 ﻿﻿﻿﻿﻿﻿﻿﻿﻿﻿﻿﻿﻿﻿The same woman posed for another portrait known as La velata or La donna velata(the veiled woman) painted about three or four years earlier. She wears the same pearl bauble in her hair in both portraits. The name Margherita means "pearl" in Italian. A contemporary account refers to the woman in the La velata portrait as "the woman Raphael loved until he died". Margherita Luti is thought to have been the model for both of these portraits and many of Raphael's other works.

Among the other works Margherita Luti is thought to have modeled for are several Madonnas including the Madonna della Seggiola (known as Madonna of the Chair), painted around the same time as the La velata portrait.

In the La fornarina portrait she is wearing a wedding ring and an armband on which is written the name Raphael of Urbino. Myrtle branches, symbolic of love and marriage, fill the background. These details were discovered recently when a restoration of the portrait revealed that these symbols had been painted over, apparently by Raphael's assistants after his death.
﻿ 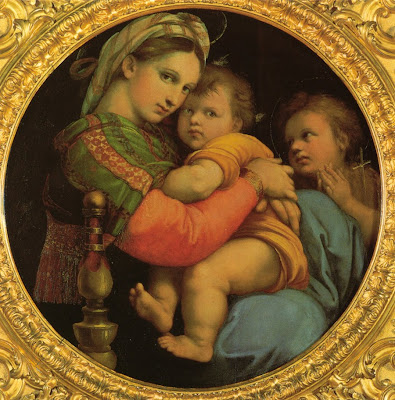 According to Giorgio Vasari, in his Life of Raphael, Raphael was so in love with his mistress that he could not focus on his painting if separated from her. She accompanied him everywhere and even had to be smuggled in to live with him in secret so that he could complete his frescoes at the Villa Farnesina, the pleasure palace of his wealthy friend, the Sienese banker, Agostino Chigi. In some versions of the legend Raphael's mistress is also smuggled into the Vatican to live with him there so that he can finish his frescoes for Pope Leo X. And thus the legend of Raphael the sex maniac was born.

A marriage to a mere peasant girl, the daughter of a baker, would have seriously damaged Raphael's reputation with the Roman and Florentine aristocracy, quite probably ending his career as a painter. 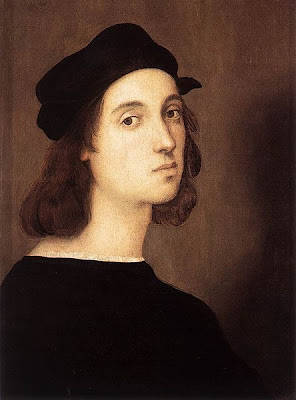 Self Portrait by Raphael, 1506

﻿﻿﻿﻿﻿Around the time the La velata portrait was painted, Raphael was being pressured by the Cardinal of Bibbiena to marry one of his nieces, a woman named Maria Bibbiena. Raphael didn't refuse the Cardinal, but put off the matter, saying he wanted to wait three or four years before marrying. After the four years had passed, Raphael agreed to the marriage, but he kept putting off the wedding with excuses.

Finally Maria Bibbiena died from an illness and the wedding never took place.

The frescoes Raphael painted at the Villa Farnesina are filled with depictions of love and marriage suggesting that Raphael's friend Agostino Chigi may have helped arrange a secret marriage around the time he smuggled Margherita into the Villa to reunite his lovelorn friend with his beloved so that he could finish his frescoes.
Vasari takes great pains to discredit Raphael's relationship with Margherita Luti, never referring to Margherita by name, but as the "mistress", or the object of a "light attachment". But even Vasari admits that Raphael could not focus on his painting when seperated from her, and that although he sent her away shortly before his death, he made financial provisions for her future.

Vasari attributes Raphael's death to overindulgence in sex with his mistress, based on the medieval theory that having too much sex could disturb the humours of the body. Vasari's Life of Raphael helped create the legend of Raphael's death. In some versions of the legend, Raphael's mistress is even blamed for causing his early death.

After Raphael's death, his assistants found the La fornarina portrait hanging in his studio, and apparently soon thereafter painted over the nuptial symbolism in the painting to preserve the reputation of their beloved master and prevent a scandal that would put an end to their own work at the Vatican and consequently bankrupt them. The symbolism in the painting would have been immediately obvious to anyone at the time to mean "this is my wife whom I love".

Vasari contributed to the coverup in his Life of Raphael which reads like the life of a saint. Vasari's Lives of the Painters is a veritable hagiography of Rennaissance Art.
﻿ 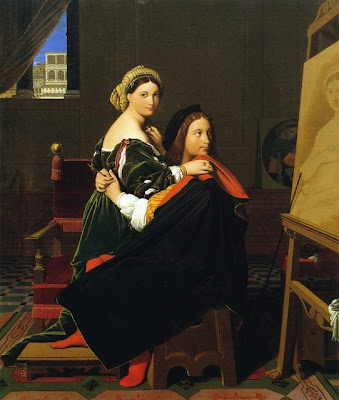 ﻿After reading between the lines of Vasari's Life of Raphael and seeing the portraits many artists have become obsessed with the intrigueing and romantic legend of Raphael and La Fornarina.

The story of Raphael's legendary love for his model inspired Ingres to paint this portrait around 1814 depicting Margherita Luti sitting on Raphael's lap as he gazes Pygmalion like at the La fornarina portrait in progress, having apparently taken a break from his work to make love to his beautiful model. In the background a drawn back curtain reveals a view of the Vatican through the window and behind the easel a hand is holding a copy of Vasari's Life of Raphael. Leaning against the wall in the back is the Madonna della Seggiola. The man with the book behind the easel is Ingres reading between the lines. 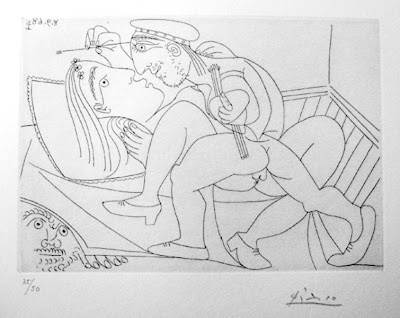 ﻿﻿In 1968, at the age of 87, Pablo Picasso created his 357 series of twenty five pornographic etchings inspired by the legend of Raphael and La Fornarina. In the final etching in the series, Raphael is depicted having sexual intercourse with La Fornarina while Michelangelo watches, hiding under the bed.

Thanks to the research of Italian art historian Maurizio Bernardelli Curuz and his associates the La fornarina portrait has now been restored revealing the truth about their relationship. Curuz and his associates have also uncovered documents suggesting that Raphael and Margherita Luti were indeed secretly married and that four months after Raphael's death the "widow" Margherita entered a convent in Rome.

We owe a debt to Maurizio Bernardelli Curuz and his associates for finally bringing the true story of Raphael and Margherita Luti to light.

The Lives of the Artists by Giorgio Vasari (translated by Julia Conway Bondanella and Peter Bondanella), Oxford, 2008 *

Was Raphael Married? by Melissa Snell, 2005

Raphael, the artist killed by too much sex? by Jonathan Jones, 2009


The painter meanwhile did not abandon the light attachment by which he was enchained, and one day on returning to his house from one of these secret visits, he was seized with a violent fever, which being mistaken for a cold, the physicians inconsiderately caused him to be bled, whereby he found himself exhausted, when he had rather required to be strengthened. Thereupon he made his will, and, as a good Christian, he sent the object of his attachment from the house, but left her a sufficient provision wherewith she might live in decency.*


The master lived in the strictest intimacy with Bernardo Divizio, Cardinal of Bibbiena, who had for many years importuned him to take a wife of his selection, nor had Raphael directly refused compliance with the wishes of the Cardinal, but had put the matter off, by saying that he would wait some three or four years longer. The term which he had thus set approached before Raphael had thought of it, when he was reminded by the Cardinal of his promise, and being as he ever was just and upright, he would not depart from his word, and therelore accepted a nieceof the Cardinal himself for his wife. But as this engagement was nevertheless a very heavy restraint to him, he put off the marriage from time to time, insomuch that several months passed and the ceremony had not yet taken place.*


Raphael was a very amorous man who was fond of women, and he was always quick to serve them. This was the reason why, as he continued to pursue his carnal delights, he was treated with too much consideration and asqcuiescence by his friends. When his dear friend Agostino Chigi commissioned him to paint the first loggia in his palace, Raphael could not really put his mind to his work because of his love for one of his mistresses; Agostino became so desperate over this that, through his own efforts and with the assistance of others, he worked things out in such a way that he finally managed to bring this woman of Raphael's to come and stay with him on a constant basis in the section of the house where Raphael was working, and that was the reason why the work came to be finished.* 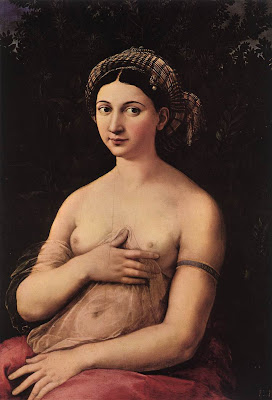