Carmilla is one of the the greatest vampire tales ever told. It inspired Bram Stoker to write his famous novel Dracula. The image of the vampire in literature and popular culture would not be the same had it not been written.

Carmilla was first published in The Dark Blue magazine and then in a collection of short stories by Joseph Sheridan Le Fanu entitled In a Glass Darkly in 1872. The tales are presented to the reader as "true" stories taken from the casebooks of one Dr. Hesselius, a "metaphysical doctor". Like the ficticious Dr. Hesselius, Le Fanu was himself deeply interested in the supernatural and many of his stories have a basis in traditional folklore and accounts of the supernatural which he collected in his researches.

Le Fanu drew his inspiration for Carmilla from a historical account of a real vampire case in an eighteenth century study of vampirism and ghosts called A Treatise on the Apparitions of Spirits, and on the Vampires or Revenants of Hungary, Moravia, etc. by Dom Augustin Calmet (Paris 1751), translated by Henry Christmas as The Phantom World : or, the Philosophy of Spirits, Apparitions, etc. (London 1850). Calmet's treatise contains several accounts of vampire cases in which the civil and ecclesiastical authorities became involved during the vampire epidemics that plagued Europe during the first half of the eighteenth century. 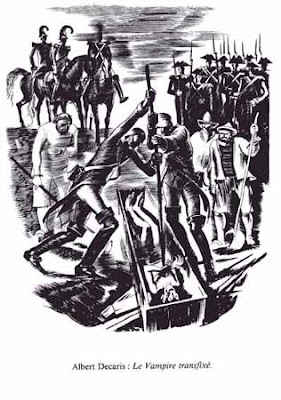 Calmet relates an account of two priests from the cathedral at Olmütz (Olomouc) in Moravia , who traveled to the village of Liebava 'to take information concerning the fact of a certain famous vampire, which had caused much confusion in this village some years before.'

The priests questioned witnesses who testified that the vampire 'had often disturbed the living in their beds at night, that he had come out of the cemetery, and had appeared in several houses three or four years ago; that his troublesome visits ceased because a Hungarian stranger, passing through the village at the time of these reports, had boasted that he could put an end to them, and make the vampire disappear. To perform his promise, he mounted on the church steeple, and observed the moment when the vampire came out of his grave, leaving near it the linen clothes in which he had been enveloped, and then went to disturb the inhabitants of the village.

The Hungarian, having seen him come out of his grave, went down quickly from the steeple, took up the linen envelops of the vampire, and carried them with him up the tower. The vampire having returned from his prowlings, cried loudly against the Hungarian, who made him a sign from the top of the tower that if he wished to have his clothes again he must fetch them; the vampire began to ascend the steeple, but the Hungarian threw him down backwards from the ladder, and cut his head off with a spade. Such was the end of this tragedy. (Phantom World, volume ii, p. 209-210)

According to the legend, Vampires can not rest without their burial shroud. This real life account of an alleged vampire plagueing a Moravian village was the basis for Carmilla. 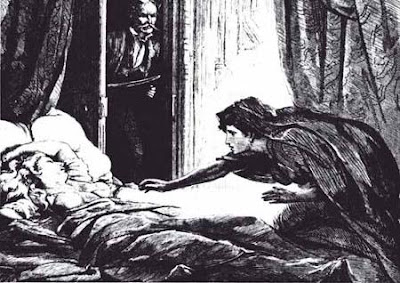 Carmilla is one of the first stories to portray a vampire as genteel and attractive. Earlier tales portray vampires as ghoulish fiends who look like walking corpses with long teeth and claws. Carmilla appears to be a very beautiful aristocratic young lady.

Carmilla is also the first homoerotic vampire tale. It is one of the earliest works of literature to imply lesbianism. It predates even Les Diaboliques(1874) by Jules Barbey d'Aurevilly, which is generally considered the first portayal of lesbianism in literature since classical times.

Carmilla chooses only females as her victims. She lusts after her victims and seduces them. Some of the dialogue is quite provocative for it's time.

Sometimes after an hour of apathy, my strange and beautiful companion would take my hand and hold it with a fond pressure, renewed again and again; blushing softly, gazing in my face with languid and burning eyes, and breathing so fast that her dress rose and fell with the tumultuous respiration. It was like the ardour of a lover; it embarrassed me; it was hateful and yet overpowering; and with gloating eyes she drew me to her, and her hot lips travelled along my cheek in kisses; and she would whisper, almost in sobs, "You are mine, you shall be mine, and you and I are one for ever". 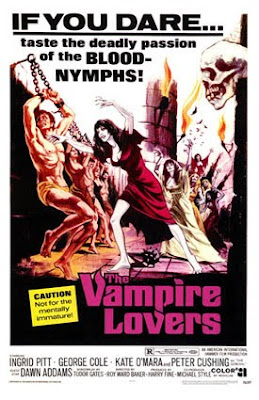 Carmilla has inspired many films. Most notably Carl Theodore Dreyer's Vampyr, although it bears very little resemblance to Le Fanu's story. My favorite of the many campy B movie adaptations is the Hammer Films version called The Vampire Lovers(1970). It stays pretty close to the original story while licentiously playing up the lesbian vampire angle.

Carmilla has had a great influence on literature and popular culture. More importantly it's a really great story, masterfully told by one of the greatest storytellers of all time. It's the perfect vampire tale to read for Halloween.

Illustrations for Carmilla by David Henry Friston and Michael Fitzgerald from the 1872 edition of In a Glass Darkly. Illustration from The Phantom World by Albert Decaris.

Thank you for this. "Carmilla" to my mind remains a fascinating tale worthy of a really top-quality adaptation.