The Forge Of Vulcan By Diego Valazquez 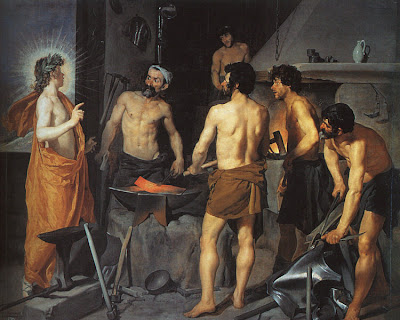 This painting by Velazquez from 1630 depicts the god Vulcan appearing as a beautiful youth to the swarthy blacksmiths making armour at his forge deep within the volcanic bowels of the earth. I make no assertions as to the sexuality of Velazquez and have no information on that subject. I simply wish to point out the great beauty of his naturalistic renderings of the male figure. Just look at the play of light and shadow on the sinewy muscles of those masculine men. It's enough to make any connoisseur of the male figure giddy. 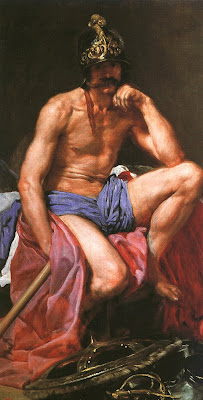 This painting of the god Mars further illustrates Velazquez's mastery of naturalistic depictions of manly subjects. I like that leather daddy moustache Mars is sporting. One wonders about the proliferation of sexy men in seventeenth century Spain. 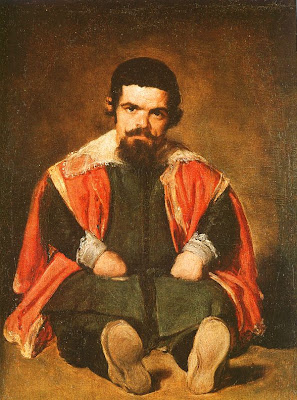 In addition to painting mythological and religious subjects and portraits of royalty (the standard fare of artists in this period), Velazquez also painted the dwarves( an archaic term in our thankfully more civilized epoch) of the spanish court. These paintings are among Velazquez's most beautiful portraits. I find these of particular interest because they portray persons who overcame the prejudices of the brutal and barbaric world they lived in by exploiting those very prejudices with impressive cunning and tenacity to rise to positions of great wealth and influence.