Poems of a Penisist by Mutsuo Takahashi 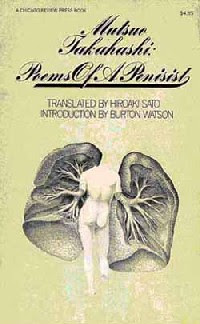 Recently a friend sent me a link to Jeffrey Angle's interview with the poet Mutsuo Takahashi in which Takahashi recounts his memories of an evening he spent with his friend Yukio Mishima about two months before Mishima attempted to incite a military coup in 1970, afterwards committing ritual suicide with a young man named Morita Masakazu on the grounds of the Japanese Defense Forces. I had never heard of Mutsuo Takahashi and was immediately intrigued.

In the interview, Takahashi speaks of meeting Mishima and his friend Morita for a few drinks and afterwards accompanying them to a sauna. He recalls details of their conversation which in retrospect foreshadowed what Mishima was planning to do. It's a fascinating interview to anyone interested in Mishima's life and his dramatic and violent death.

Mentioned in the interview was a volume of poems by Mutsuo Takahashi entitled Poems of a Penisist. Already intrigued enough by the interview, I made a note of the poet's name and the compelling title. The book proved to be somewhat hard to find. A few months later I was quite surpised when I found a copy listed for sale online by my local used bookstore.

The following day I headed for the used bookstore, wondering if the little old lady who runs the place, a retired librarian, was going to give me a funny look when I asked her about the book. On arriving at the bookstore, I managed to ask for the book without giggling and the little old lady smiled and located the book for me without batting an eyelash. I must pause here to pay tribute to our librarians, so often the unsung champions of free speech.

Upon returning home, I opened the book and, much to my delight, discovered some of the most beautiful homoerotic poetry I've ever read, more like Walt Whitman than Yukio Mishima in it's honest celebration of the male body. In Mutsuo Takahashi's poems sex between men is treated as a holy sacrament. His poems are sacred liturgies unfettered by any hint of self loathing or guilt. He has given us a pure and beautiful expression of his sexuality and his profound love. For this Mutsuo Takahashi deserves a place in the canon of homosexual saints. 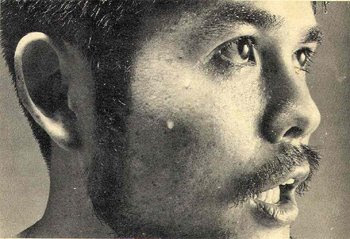 
From Poems of a Penisist

You are a murderer
No you are not, but really a wrestler
Either way it's just the same
For from the ring of your entangled body
Clean as leather, lustful as a lily
Will nail me down
On your stout neck like a column, like a pillar of tendons
The thoughtful forehead
(In fact, it's thinking nothing)
When the forehead slowly moves and closes the heavy eyelids
Inside, a dark forest awakens
A forest of red parrots
Seven almonds and grape leaves
At the end of the forest a vine
Covers the house where two boys
Lie in each others arms: I'm one of them, you the other
In the house, melancholy and terrible anxiety
Outside the keyhole, a sunset
Dyed with the blood of the beautiful bullfighter Escamillo
Scorched by the sunset, headlong, headfirst
Falling, falling, a gymnast
If you're going to open your eyes, nows the time, wrestler


The God Statue I Love

Your body is made of lily and sex
Piles of strong-smelling, night-illuminating lilies
Upon them your pageboy has spread the ointment of nard
For the lower half of your body you wear a bullfighter's tight
costume
The elegant joints of your big fingers press on the brocaded
arabesques
Beneath the costume, between the two overpowering thighs
Wrapped in highly fragrant clouds
Sleeps a beautiful lion cub, I think
The gentle beast is made of particularly splendid lilies
The suspenders press into your dark chest
The night sky framed by the lions silky hair
Hooked to the chain of stars a medal shines like the moon
One arm, gathering the flow of muscles, like a river
Leisurely hangs towards the center of the earth
The hand grips a whip
The leather lash of the whip snake-coils on the ground
You will suddenly jerk it up and imprint a swift welt on the
air
From the wound brilliant blood will spurt
I will put your standing figure
On the horse's fluffed buttocks, in the shining sky at dawn
On your shoulders
I shall put the wrestler's head as thoughtful as a forest
(I clipped it from the pictures in a sports magazine)


In the name of
Man, member,
And the holy fluid

Wow! Fantastic post, and great poetry. In the name of Man, member and the holy fluid. Amen.

I'm hurtling into the abyss of my 40s and there are still important literary references like this one that haven't graced my eyeballs? Absurd. Regarding the librarian: yes, they are heroic since they have to fight against government intrusion ala Sarah Palin's recent behavior, and the D.A. in Oklahoma a few years back who said The Tin Drum was obscene and sent the police door to door to people who had rented VHS copies at home.